When I first started tracking my data with a Fitbit pedometer, it was more of a novelty but fast forward seven and a half years and a great deal has changed.  Fitbit has exploded and gone from a no name company to a 4.1 billion dollar consumer brand.  The writing was on the wall when they needed money two years ago this August, they raised 43 million.  They recently went public (NYSE: FIT) doubling in price since its initial offering; trading at more than $42/share at the close of the market on Friday.

Canalys has estimated that fitness tracker sales have increased by 150 percent year-on-year and revenues blew away projections increasing by 175 percent in 2014 with reported sales of 745 million. The word on the street is that no one knows the exact number of Fitbit products sold in 2015, but they own 60 percent of the market.

On a personal note, I found myself feeling a bit “naked” recently when I realized I was not in possession of my Fitbit.  I have worn a Fitbit One (pictured) religiously since 2008.  During that time period, Fitbit has informed me, that I have:

Pretty cool data.  So, when I found myself one Thursday afternoon with my Fitbit nowhere to be found …I felt like I was, well, not getting credit. Not getting credit for all the steps that I took and all the flights of stairs I climbed for the remainder of that day.  One of the best things about the whole quantified self component including Fitbit, is that it holds you accountable!  I have a goal of trying to accumulate 275,000 steps each month or about 70,000 steps each week and 10,000 steps and 10 flights of stairs a day.  Some initial findings during the period of time that I was without my Fitbit:

A few days later I realized where I had left that Fitbit of mine and now I’m back on track.  One new thing I realized since finding it though, I have trouble hitting my 10 flights of stairs/day goal when visiting in Florida.  Boy it’s flat down there! 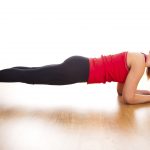 The Power of Planking
Consumers’ Confusion and Misconceptions Over Gluten Definition